What are cannabinoids? How do they work?

Cannabinoids were first recognized by scientists in the 1940’s. The molecular structure of tetrahydrocabinol (THC) was then discovered in 1964. Because of the molecular similarity between THC and cannabidiol (CBD), researchers believed at first that CBD was the precursor to THC. Modern science has now determined that CBD and THC are produced independently in the cannabis plant.

A plant’s ability to produce a special family of chemicals sets cannabis apart from most other types of plants. Cannabinoids are phytochemicals that directly interact with the human endocannabinoid system.  Current science has placed the total number of known cannabinoids well past 80. However, the most famous and common of them is tetrahydrocannabinol (THC); the cannabinoid most commonly associated with psychoactive effects and recreational marijuana use.

In addition to THC, cannabis contains cannabidiol (CBD) and over 80 other different cannabinoids, all which offer their own medical benefits. Cannabidiol is non-psychoactive yet provides anti-inflammatory, neuroprotective, antipsychotic, as well as other properties that make it interesting and keep it relevant in the world of medical science. Current research into the applications and qualities of THC, CBD, and other cannabinoids is happening on the largest scale we have ever seen.

The research mentioned above is aimed at learning more about these listed cannabinoids and the unlocked potential of medicinal cannabis:

Contrary to popular belief, the body naturally makes its own version of cannabinoids in the endocannabinoid system. The chemicals present in cannabis simply activate the cannabinoid receptors that already exist in the body. Therefore, when people ask about the relationship between getting high and cannabis, they misrepresent the true power of the plant in its harmonious relationship with our bodies.

Based on the strain, cannabis plants show a wide variety in the amount and type of cannabinoids they can deliver. The blend of cannabinoids delivered by a plant is known as the plant’s cannabinoid profile. Breeding techniques have been utilized to control the hereditary qualities of plants and change the cannabinoid profile for different medical uses. For instance, strains of hemp, which are utilized as fiber, have been bred over time with an end goal of low psychoactive chemicals like THC, and high in non-psychoactive CBD.

To provide medical and psychoactive effects, these unique chemicals work together with particular receptors within the central nervous system and immune system. Cannabinoids activate two types of receptors: the CB1 and CB2 receptors. Even though the CB2 receptors exist in the immune system, they are also present in the nerve endings and the brain. After some cannabinoids have entered your body during pot ingestion, they appeal to various cannabinoid receptors. 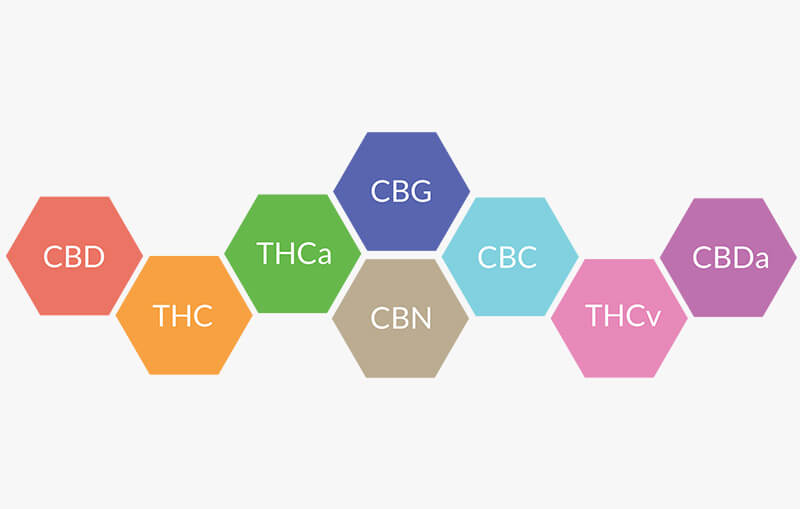 A quick example: The THC cannabinoid attaches to receptors to activate the endocannabinoid system. Since THC activates the CB1 receptors inside the brain, the user gets a “high” feeling.  CBD cannabinoids do not fit perfectly with both the CB1 and CB2 receptors, but researchers are constantly studying their indirect effects.

Another cannabinoid – Anandamide – also has effects on the CB1 and CB2 receptors. Anandamide plays a crucial role in appetite production and reward regulation. Elevated levels of this cannabinoid can increase the pleasure associated with food consumption. It also exists in chocolate and researchers believe that it is responsible for the intense enjoyment people experience when eating it. Anandamide is also thought to be responsible for regulating sleep patterns and pain.

The most abundant cannabinoid in marijuana plant is 2-AG (2-arachidnoylglycerol). 2-AG has effects on the peripheral and central nervous system. Like anandamide, it plays an important role in the regulation of appetite, the immune system functions and in managing pain. Researchers also believe that it plays a crucial role in inhibiting proliferation of cancerous cells.

Synthetic cannabinoids also exist. They include marinol, which is produced for medical purposes. Like other cannabinoids, they affect the central nervous system. They’re used highly in treating anorexia and other issues related to weight loss among patients with nausea and vomiting linked to cancer chemotherapy.  Debate on the effectiveness of synthetic cannabinoids undoubtedly exists.

The medical effects of cannabis

The effects of cannabis are clear. The benefits, however, vary depending on the number of active compounds and the amount of active compounds contained in the strain. Cannabinoid ratio can relate to THC: CBD. A quick example, the ratio of 1:1 helps with muscle spasms and pain control. Therapeutic implications of the ratio have been a heavy focus of many recent studies.

As with other compounds, people respond differently to cannabis. Even though it helps with the difficult medical conditions, some people might not benefit from it.

The Future of cannabinoids

Most likely, commercially available cannabinoids will become more prevalent in the industry. The already approved drugs, which are available in the market, include dronabinol and nabilone. As more studies are conducted on cannabinoids, we might see more medical drugs that incorporate chemical compounds of marijuana.

Studies on cannabinoids involve biochemical, physiological and chemical varieties. Since cannabis is more than just the herb that helped people get high, people in North America have started accepting it.